This is the custard pie recipe from “What Mrs. Fisher Knows About Old Southern Cooking,” published in 1881. This cookbook is thought to be the first African-American cookbook.

Mrs. Fisher was born into slavery in South Carolina. She married a man from Alabama and they made their way to San Francisco after the Civil War. In San Francisco, she ran a pickles and preserves business and was widely recognized for her culinary skills. Since she could not read nor write, her cookbook was made by dictating her knowledge to a group of white women.

The crust of this pie has both butter and lard. Lard is a fat product from pigs and it creates a very flavorful, flaky crust (not to mention it is much better for you than manufactured vegetable shortening). This recipe also calls for freshly grated nutmeg which is fragrant and smells heavenly. As with other vintage recipes, this recipe does not include an oven temperature nor how long to bake it, relying on the home baker to have a basic level of knowledge.

A very special person gave this book to me two years ago at a culinary history event. Not only did he foster a curiosity in me about food history but he shed a new light on American history. You can read more about his research on Abby Fisher in the Fall 2007 issue of Repast (click the image below).

Click here for another interesting article about Mrs. Fisher from Gastro Obscura.

Here is the text from the original which I have modernized with additional instructions below. Note that the original recipe makes 2 pies! Half this recipe if you want 1 standard 9″ pie. 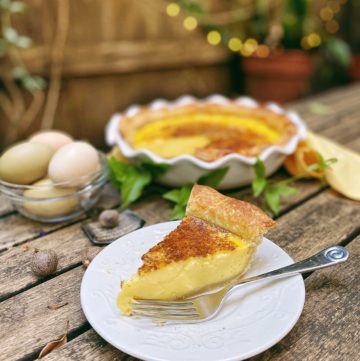 For the pie crust:

For the custard filling:

To make the pie crust:

To prep the pie crust:

To make the filling: