Tiramisu is an Italian dessert with layers of espresso-soaked savoiardi (lady fingers), creamy mascarpone, and shaved chocolate or cocoa powder. In this post I will discuss the history behind tiramisu, weigh-in on common adaptations, and give you my favorite recipe!

Tiramisu translates to “pick me up.” It is a relatively new dessert dating back to the late 1970’s-80’s. There is some dispute over who should receive credit for creating it. Most commonly, the restaurant Le Beccherie in the town of Treviso receives “official” credit. The pastry chef, Roberto Linguanotto, said he worked “side by side” with restaurant owner, Alba Campeol, who claims the idea came about after the birth of one of her children. Cameol spiked sbatudin, a type of sugar that was commonly beaten together with egg yolk and believed to give extra nutrition to children, with extra caffeine for energy (source). You can still visit this restaurant today but it is no longer owned by the Campeol family (although they say they use the same recipe).

However, according to Lidia Matticchio Bastianich’s research for her book, “Lidia’s Italy: 140 Simple and Delicious Recipes from the Ten Places in Italy Lidia Loves Most,” the true creator of the dessert is Speranza Garatti, who starting serving the dessert in a goblet as early as the 1960’s (source). Another chef from Treviso, Carminantonio Iannaccone, also claims to have created the dessert.

A neighboring town, Friuli-Venezia Giulia, argues that tiramisu was invented in the hotel Albergo Roma where Norma Pielli, wife of the manager of the hotel’s restaurant, made a modified version of a dessert called Dolce Torino, swapping butter for mascarpone and alchermes, a spiced liqueur, for coffee. This modification appeared on their menu in 1963 and 1965 (source). Here is a recipe for Dolce Torino.

There is also a scandalous theory that tiramisu was created by a brothel mistress as a way to “reinvigorate” men before they returned home to their wives (source).

Which story do believe?

The modern-day version of tiramisu gained popularity in the 1980’s. This is an interesting article that documents how tiramisu took New York, San Francisco, and Paris by storm!

There are a million variations of tiramisu!

Coffee versus espresso: Some recipes call for espresso and some call for coffee. I used strongly brewed coffee with great results. This is also easier to do at home without a fancy machine. Feel free to use espresso if you have access.

Egg whites versus whipped cream: Traditionally, tiramisu uses egg whites folded into the mascarpone. To do this safely without risk of salmonella, you should use eggs that have been pasteurized in the shell. I chose to use homemade whipped cream instead. It is light and fluffy and gave a great texture.

Marsala wine versus rum: Marsala wine is traditional. Make sure to get a dry wine so as to not add too much sweetness. 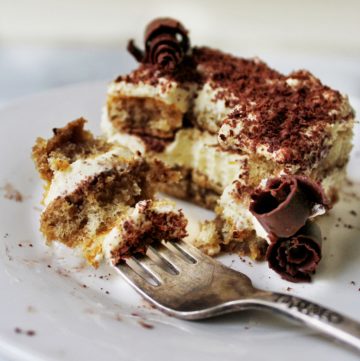