M&Ms were patented by Forrest E. Mars (of the Mars Candy Company) in 1941. These candies were originally sold exclusively to the US Military during World War II because they were heat-resistant and easy to transport.

But their history dates much further back… Mars took the idea from a British company, H.I. Rowntree & Co. (now Nestlé), who made chocolate beads coated in hard sugar shells during the Spanish Civil War. These chocolates were called “Smarties.” Rowntree was making Smarties in some form or another since 1882.

However, the original prototype dates even further back! French confectioners of the 18th century made chocolate drops jokingly named “Crotte de Lapin” (Rabbit Droppings). They started covering the chocolate drops with sugar to prevent them from melting on the white gloves of the wealthy ladies who were consuming them.

You can read more about the fascinating history here.

A huge thank you to Kathleen, a member of Sally’s Baking Addiction Facebook group, for finding this recipe from one of her neighbors. Keep history alive! 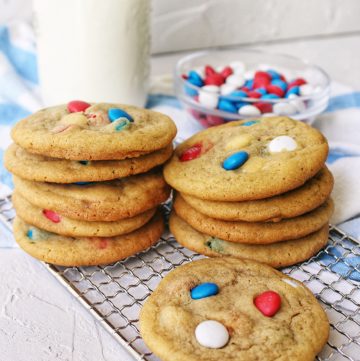