This seasonal interpretation of panzanella features grilled peaches, tomatoes, corn, and avocado. I also added a jalapeño for a little spice, goat cheese, and basil. All the flavors come together with a Dijon-shallot dressing. I hope you make this salad the next time you have ripe peaches!

A bit of history….

Panzanella is a Tuscan dish typically consisting of stale bread, tomatoes, cucumbers, onions, and basil. An early version of panzanella, called pan lavato “washed bread,” was first mentioned by Italian author Boccaccio in the Decameron in the 14th century. It was made with water-soaked bread and assorted vegetables but importantly, not including tomatoes (source).

Panzanella is said to come from the two words “pane” (or bread) and “zanella” (soup bowl) which is what it is served in (source). It used to be made of stale bread soaked in water and then squeezed dry. It became more well known in the 16thcentury when an Italian painter named Agnolo di Cosimo, also known as Bronzino, became very fond of onions with oil and vinegar served with toast.

This dish would be great to bring to a BBQ or served as a nice side to meat. You can also add salami to make it heartier.

Tag me on Instagram at @anchoredbaking and comment below with your experience if you make this panzanella! Enjoy! 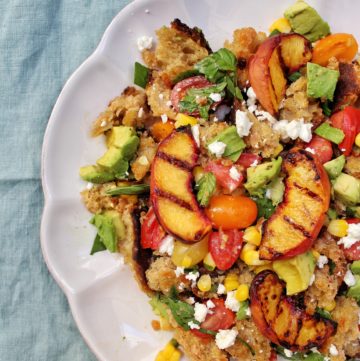