If you are a fan of apple cider donuts, you are going to love this recipe! These whoopie pies are made with reduced apple cider, warm fall spices, and a spiced marshmallow filling. The tops are brushed with melted butter and a cinnamon sugar coating that will remind you of the apple cider donuts you get at the farmstand.

Today I am sharing a recipe for Apple Cider Donut Whoopie Pies! Apple cider donuts are one of my favorite treats to have in the fall. I wanted to take all the warm spice flavor and convert it into a whoopie pie. We loved these so much that we will make them every year!

What is a whoopie pie?

Whoopie pies are like little cake sandwiches. The cakelettes are soft and tender. They may look like cookies but they have the texture of cake. There is a sweet filling sandwiched in-between. The most common and traditional whoopie pie is chocolate cake with marshmallow fluff filling.

I grew up with my mom’s whoopie pies (they are the best!) and I was surprised when my friends in California had not heard of them.

Whoopie pies are very common in New England. There are a few people wanting to claim fame to inventing the whoopie pie. Most food historians believe that whoopie pies have their origin in Amish communities in Pennsylvania (source). This is in line with their values of not wasting anything. It is believed that Amish women did not want to waste extra cake batter so they dolloped the extra and baked them like cookies.

Labadie’s Bakery in Maine is credited with being the first to sell whoopie pies in 1925 followed by Berwick Cake Company in Massachusetts sometime between 1927-1931. Whoopie pies became even more famous in a 1930’s cookbook called Yummy Book written by the manufactures of Marshmallow Fluff (source).

How to make these Whoopie Pies

I would love for you to try this whoopie pie recipe! Tag @anchoredbaking or #anchoredbaking so I can see your creations! As always, please let me know if you have any questions or feedback 🙂

If you love apple cider donuts, be sure to check out my Apple Cider Donut Cake with Apple Cider Caramel Sauce! 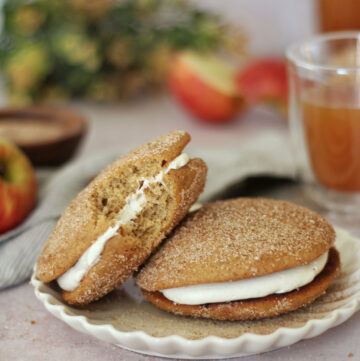 Lindsay Forbes
These whoopie pies are made with reduced apple cider, warm fall spices, and a spiced marshmallow filling. The tops are brushed with melted butter and a cinnamon sugar coating that will remind you of the apple cider donuts you get at the farmstand.
Print Recipe Pin Recipe
Prep Time 1 hr
Cook Time 15 mins
Course Dessert
Cuisine American
Servings 8 whoopie pies