Today we are bringing back the tradition of eating cake to celebrate voting! Election cakes date back to the colonial period when “Election Day” was a holiday. The Puritans rejected religious holidays like Easter and Christmas and celebrated their ability to vote for local officials instead (source). It is thought that this cake was served to those waiting for the election results and to those guests who traveled far distances in order to vote. After the Revolutionary War, it is believed that cakes were used to incentivize voting and celebrate our new country.

Election cakes are associated with Hartford, Connecticut because people would travel far distances to cast their votes here. There would be ornate parades and balls to celebrate the occasion. There is a record in 1771 of Ezekial Williams being reimbursed 3 British pounds for the cost of the ingredients to make election cakes.

The first printed recipe for an election cake comes from the second edition reprint of the first American cookbook, “American Cookery” by Amelia Simmons in 1796. Her recipe calls for 30 quarts of flour, ten pounds of butter, 14 pounds of sugar, and lots of brandy, raisins, and spices.

It is also important to note the role of women in elections during a time when women were not able to vote. This is a nice summary, “Election Cake became the first food strongly associated with American politics. What made it more unique and important was the way it provided women with an opportunity to express their commitment to their new country. This was no trivial outlet in an era that prohibited women from voting. Through their production of Election Cake and other recipes, including Independence Cake, Franklin Gingerbread, and Democratic Tea Cakes, women projected their influence into the public sphere and helped ingrain patriotism into our national culture” (source).

Election Cake is a cross between a bread and cake. It has warm spices and dried fruits soaked in whiskey (or brandy). It is traditionally leavened with yeast as baking powder was not commercially available during that period (source). There are recipes using a sourdough starter (here) but I opted for dried yeast and a little baking powder for extra oomph. I also added orange zest for brightness. It traditionally uses raisins (or figs) but I used dried cranberries, blueberries, and golden raisins for red, white, and blue 🙂 I think this would also be good with nuts. It is best served warm- you can also toast it and serve it with butter! 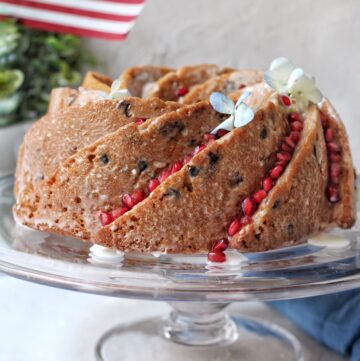 For the cake batter: